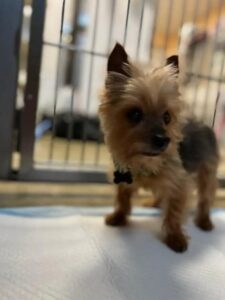 Meet Rupert “Rue”, who is approximately 14 years old and 4.4 pounds. He was brought to the shelter as a stray at the end of July, and he was having seizures. They immediately reached out to us, and we got him out right away. He immediately had some obvious issues, such as seizures, bad eyes (he is blind), a rotten mouth, vomiting, and rapidly circling to the right after eating. Most of those symptoms, combined with high bile acids, have led us to suspect that he has a portosystemic shunt. We were shocked to find out that he could have a congenital liver shunt and still be alive at his age, but after our vet spoke with specialists, we found out that it is possible. Due to his age and general health, surgery to attempt to correct it is not in his best interest, so we decided to not get an official diagnosis via advanced ultrasound, and just see how he responds to medical management. He is currently on a prescription liver diet, levetiracetam 3 times a day for seizures, metronidazole, and lactulose. The difference in him is amazing, and his seizures, circling, and vomiting are under control. He loves to find his foster mom, demand to be put on the couch, his mental awareness is much better, he gets excited and wags his tail, loves to be held, and is a happy boy. He goes to work with his foster, which he loves, so that she can give him his seizure medicine at the correct times. Rue still needs to see the eye specialist, and at this point, we do not know if he will be able to get a dental due to his health, but we are hopeful that he will. Right now, he is just getting spoiled and loved on, and he is soaking it all up.