Yorkie Luv Rescue is committed to finding loving, happy homes for every dog in our rescue. From time to time a dog is considered unadoptable for a variety of reasons such as permanent medical conditions, emotional issues and even age. Sometimes this is apparent before we rescue, other times it is not. These dogs still deserve a loving home and good quality of life. In the Forever Ours program we provide ongoing medical care while they spend the remainder of their life with their foster family.

Please consider joining our Sponsor program or donating to support the care of our Forever Fosters.

If you would like to sponsor one of our Forever Fosters and have your own website, we will gladly add a link to your site with a short description, as well as continued updates of the dog you are sponsoring. 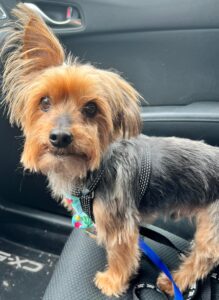 Meet Xander. He came to Yorkie Luv Rescue as an owner surrender. He is 8 years old and weighs 8 pounds. He is very sweet and timid at first until he warms up. He gets along with other dogs but seems to prefer the company of dogs a little bigger than him that like to play but also relax too. He loves to go on walks and be with his humans. He also loves to sleep with them. He is crate trained and housebroken. He would do best in a house that is quite with no young children and someone that is home or works from home. He won’t be available for adoption until late July when he has his much needed dental done. We will be posting updates when he is ready. 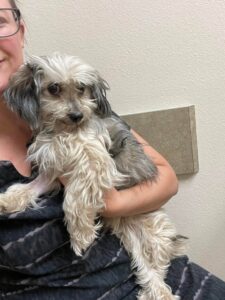 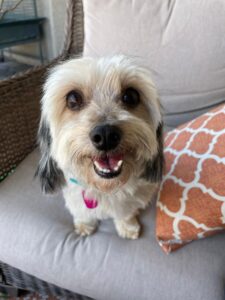 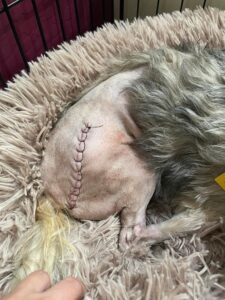 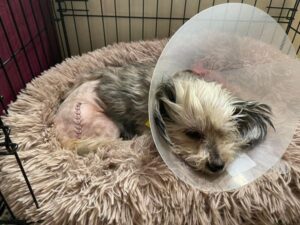 She is back home with her foster family and resting. Overall everything went well. There were a couple times her heart rate got pretty low but her heart responded very well to the medication needed to support it under anesthesia. There was not enough healthy bone for a plate so screws were used to hold everything in place. Bunnie has a long recovery ahead of her. It can take the soft tissue 2-3 weeks to heal and 8-12 weeks for bones. For the first two weeks she must be confined to a crate or small area, once her sutures are removed in 2 weeks we will begin to slowly increase her activity.
PUPDATE: 4/11/2022
Bunnie is at our vet this am we are redoing x-rays on her heart and doing a EKA for the cardiologist to review, She may need a echo before surgery we should find out by Wed. Keep watching for her updates.
PUPDATE:
Bunnie went for her initial vet visit yesterday. Bunnies pelvis is broken in 3 places and will definitely need surgery. We will be consulting with an orthopedic surgeon soon.
The veterinarian was very concerned about Bunnies heart arrhythmia as it is very abnormal . We went over a couple scenarios or possible diagnostic testing that can be done but the vet ultimately decided Bunnie should see a cardiologist. She is concerned about Bunnie under anesthesia with such an abnormal heart beat.
We did receive some bloodwork/ urine results this morning. She does not have a urinary tract infection so the bloody urine may be trauma related.  
Keep watching for her updates

Bunnie was found as an injured stray by animal control. The shelter suspects Bunnie was hit by a car. She has a severe pelvic fracture that will require surgery and her hind end is covered in bruises. Bunnie also has a heart arrhythmia possibly due to AV block and on x-ray her heart looks a little enlarged. She is missing some incisors and one canine tooth has a tip fracture. Her foster also noticed last night that she has blood tinged urine. Her undercoat is full of matted hair and ticks. Bunnie is currently on 2 pain medications and treatment for the ticks.
Bunnie has a long road to recovery. She will see our veterinarian today then will need a consultation with an orthopedic veterinarian to repair her pelvic fractures.
Despite everything she has going on Bunnie has been the sweetest girl! She loves to cuddle in her fosters lap and just wants to be loved.
Bunnie is estimated to be two years old. 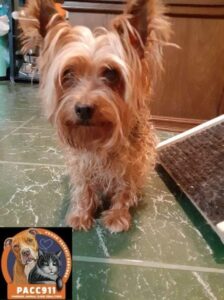 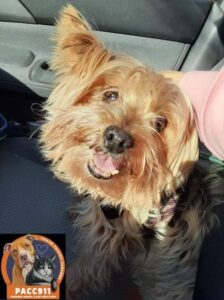 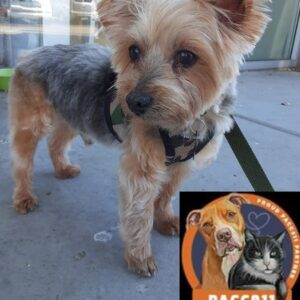 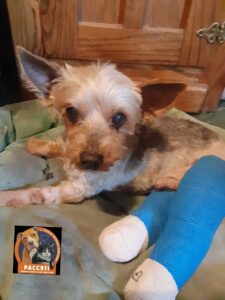 Jerry is home after surgery, and is doing quite well! He ended up getting bilateral tibial crest transposition (basically removing part of a bone, moving it to the center, and securing with wires to keep his patellas in place), tendon release, and lateral imbrication (sutures to stabilize the stifles). The doctor also gave him platelet rich plasma injections in both shoulder joints to treat chronic instability and medial glenerohumeral injuries (damage to the shoulder joint ligaments). We were just planning on doing the right shoulder, but once he took rads and felt him, it was evident that his left shoulder was having issues as well, likely from being the leg that was doing the most work. These injections work by activating cells to repair damaged and wounded tissues.
Jerry’s biggest complaint right now is the peg legs, but the bandages will be removed Thu, and the harder recovery will begin. He ate his 1/2 portion of dinner, and is resting well after an almost 3 hour surgery.
PUPDATE:
Jerry has been here for a month now, and is settling in. He is a shy boy who won’t seek attention, but loves gentle pets. He seems to prefer a calmer environment, and is generally calm himself. He does use his voice though, tries to run outside (he currently can’t), and enjoys daily walks. He is perfectly house broken and loves his crate.
He has met with the orthopedic surgeon and has severe bilateral luxating patellas, along with weak ligaments in his front right leg (likely as a result of his neck damage), which causes his front right leg to luxate. He will be getting bilateral luxating patella surgery, along with a prp (platelet rich plasma) injection for his right leg to strengthen his ligaments and keep the leg in place. He is scheduled for April 4th, and will have a few months of recovery. Once he’s recovered, he will get his dental, and then will be available for adoption.
Meet Jerry! Over the weekend, the Arizona Humane Society reached out to us to help this sweet approximately 9 year old boy, and we are glad that we had an open foster. While at the Humane Society, they noticed that he doesn’t always use his front right leg, and when he does, it often gives out, leading to him falling. His back legs give him issues as well. He had radiographs taken while showed that he has problems with his cervical spine (specifically narrowing of c6-t1). This is likely a chronic disk injury that has caused problems with his right front leg. He was also diagnosed with bilateral luxating patellas, with his right hind leg having a medially displaced patella. From exam with our vet today, it can be manually put in place, but it pops back out.
Right now, we are exploring treatment options for him and he may need surgery for his right hind leg, and he also needs a dental due to typical Yorkie teeth.
His foster says that he is as sweet as he is adorable, and is a fantastic dog! He does fall and has a slow, awkward gait, and he is not able to be as active as he wants to be. He has been started on a pain and anti inflammatory medicine for the time being.
This sweetheart needs our help!
Thank you to Phoenix Animal Care Coalition (PACC911) for your donation.